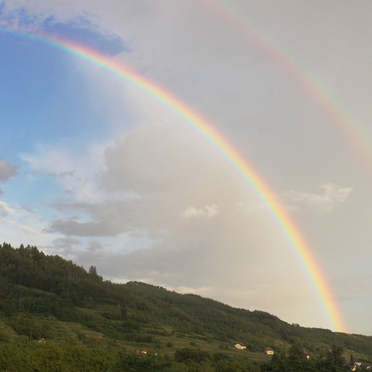 Sometime around mid-December, 2019 we started to hear about a new virus that was causing havoc in a region of China. Not much was known about it at the time, and there didn’t seem to be reason for the United States to be concerned. By the end of January, however, things were started to change.

JUST IN: US imposing travel ban on foreign nationals who have been in China
CNN’s Webpage, January 31

It is hard to believe it has been a year since these headlines were published. Everything seemed to happen so fast. There was so much we didn’t know back then, and with a lack of information comes speculation. With speculation comes rumors and conspiracy theories. Remember the fear that President Trump would cancel the election because of COVID? Governor Newsome never declared martial law, as was rumored. 2.2 million Americans have
not died from the virus, and Jesus did not return.

But “fake news”, rumors and conspiracy theories are nothing new. During the season of Lent we are reminded of one of the greatest “fake news” conspiracies ever. After Jesus was crucified and placed in the tomb, we read in Matthew 27:62-66:

The next day, the one after Preparation Day, the chief priests and the Pharisees went to Pilate. “Sir,” they said, “we remember that while he was still alive that deceiver said, ‘After three days I will rise again.’ So give the order for the tomb to be made secure until the third day. Otherwise, his disciples may come and steal the body and tell the people that he has been raised from the dead. This last deception will be worse than the first.”

“Take a guard,” Pilate answered. “Go, make the tomb as secure as you know how.” So they went and made the tomb secure by putting a seal on the stone and posting the guard

Matthew 28:1-10 details the resurrection of the Lord, including the earthquake, the angel of the Lord rolling back the stone, and the guards fainting out of fear. What were they going to do? How were the chief priests gong to handle this? Maybe it was time to admit they were wrong. Perhaps Jesus of Nazareth is, indeed, the long-awaited Messiah. Let’s read on:

. . . some of the guards went into the city and reported to the chief priests everything that had happened. When the chief priests had met with the elders and devised a plan, they gave the soldiers a large sum of money, telling them, “You are to say, ‘His disciples came during the night and stole him away while we were asleep.’ If this report gets to the governor, we will satisfy him and keep you out of trouble.” So the soldiers took the money and did as they were instructed. And this story has been widely circulated among the Jews to this very day.

God gave the chief priests the opportunity — the invitation — to confess the truth and to know The Truth. Yet they lied and conspired to hide their sin. Yet, no matter how hard they tried to cover their tracks the truth still came out: Jesus was not there. The tomb was empty. He had risen from the dead! No conspiracy theory could cancel that truth. Nothing in the world has been the same since.

Nothing in our lives will be the same after COVID. Our children lost a year of school. Many small business are gone, never to reopen. Anxiety levels are still high. The vaccines have brought hope for many, but they also brought more conspiracy theories. Apparently there is a “new normal”, but that seems to change daily.

Here is one welcomed change: in a few weeks we will celebrate Resurrection Sunday in church. A year ago we did not. This year we will remember the passion of Jesus on Good Friday, and we will rejoice at the empty tomb two days later. Hopefully, we will celebrate baptism as well! This is the perfect time to invite others to come and worship with us. People are desperate for truth and hope, and it is time for revival in our nation and in our church. Let it start in us, and through us.

After a year of rumors, conspiracies, and politicized news, let us bring hope by spreading the truth that Jesus is alive! The tomb is empty — He is risen!