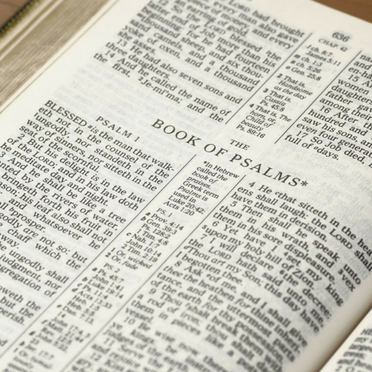 For as long as I can remember, the version of the Bible that I grew up on was the New International Version, or NIV, and it’s the version we all have grown accustomed to as
members of Hillside. However, as I got older, I wanted a simpler version. So, on my
handy-dandy Bible App that I use, I discovered “The Message”, so I tried it out, and
really liked it, and have used it ever since. This issue will be discussing why I use it
versus the NIV, as well as some pros and cons.

First, some background. According to Bible Research, this version was written by
someone named Eugene Peterson. The article about this version goes on to say that,
“Peterson did most of the work on the New Testament during 1991, at which time he
was “writer in residence” at Pittsburgh Theological Seminary. The New Testament was
published in 1993, and became a best-seller. Peterson was persuaded to do the Old
T estament, and, over a nine year period, he gradually completed the entire Bible. A
volume containing The Old Testament Wisdom Books was published in 1998,
followed by The Old Testament Prophets in 2000, the Pentateuch in 2001, the Books of
History in 2002, and an edition of the complete Bible in 2002”. This means that it was
written recently. On the site Bible Gateway, they give a testimonial from Peterson
about why he wrote this version.

“While I was teaching a class on Galatians”, he says, “I began to realize that the adults
in my class weren’t feeling the vitality and directness that I sensed as I read and studied
the New Testament in its original Greek. Writing straight from the original text, I began to attempt to bring into English the rhythms and idioms of the original language. I knew that the early readers of the New Testament were captured and engaged by these writings and I wanted my congregation to be impacted in the same way.” To summarize, he wanted to make the New Testament easier to understand. Personally, I feel that indeed, it is easier to understand.

So why do I use it? Well, first of all, as mentioned earlier, I wanted something easier to
understand. “The Message” fits the ticket perfectly. It’s in plain English, which is easy
for me to read. Also, instead of it being verse by verse, the version is broken into
chunks, like verses 1-2 or verses 3-5, which makes it easier to mentally mark where the
sermon will be on.

Now to get into the Pros and Cons. The first thing is it’s easy to read, so Pro. However,
especially during this sermon series, I got a little confused as to where the Pastor was in
the chunk of verses that the Message has, so while I like that it’s broken into chunks, I
do miss the verse by verse labeling. Another pro is that some of the modern translations
are quite humorous, which actually makes me enjoy the Bible more. For example, at the
end of James 3:6 NIV, it says “It corrupts the whole body, sets the whole course of one’s
life on fire by hell”, while in the Message it says “By our speech we can ruin the world,
send harmony into chaos, throw mud on a reputation, send the whole world up in smoke,
and go up in smoke with it, smoke right from the pit of hell”. I like how they use the
modern wording “pit of hell”, and like I said, it makes me enjoy the Bible more.

So that is The Message and the NIV compared. I really like it because it’s a modern
translation and it lets me interact with the sermon better. If you also want a modern
translation that’s easier to understand, I highly recommend it. They have books for it on
Amazon, but my go-to on Sundays is The Bible app from Life.Church, and I’ve used it
for quite a while now, and it’s easy because I don’t have to bring an actual book, and it’s
just on my phone.