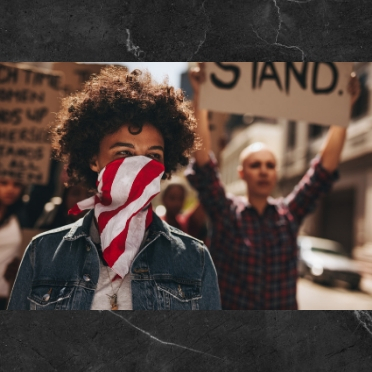 Plant the good seeds of righteousness, and you will reap a crop of my love; plow the hard ground of your hearts, for now is the time to seek the Lord, that he may come and shower salvation upon you.
Hosea 10:12 (TLB)

Protests. Civil Unrest. Riots. These words have been part of my vocabulary since I was a little kid. My father served in the California National Guard during the tumultuous era of the 1960s and 70s. His Guard unit was called to help restore peace and order during the infamous Watts Riots in 1965, and again in the Hunter’s Point Uprising a year later. I heard my father talk about Anti-Vietnam War protests at UC Berkeley and at (then) San Francisco State College. He had strong opinions about what he witnessed, and I grew up hearing those opinions.

Oppression. Injustice. Discrimination. These words did not make their way into my vocabulary until I was a teenager during the San Francisco “White Night Riots” in May of 1979. Although I could not fully comprehend the anger and frustration felt by the protesters, I knew that justice was not served when Dan White was found guilty of voluntary manslaughter after assassinating Mayor George Moscone and Supervisor Harvey Milk, the first openly gay politician elected to office in San Francisco history. Voluntary manslaughter? Even as a 16-year-old I knew that the verdict was wrong. If Harvey Milk was not openly gay, its results would have probably been different. The ensuing riots were the result of years of pain and anger being built up.

Institutionalized Racism. This term was not part of my vocabulary until I was an adult. Many of us remember seeing the video of police officers beating motorist Rodney King in 1991. Like most of us, I always try to support law enforcement, however, there did not seem to any justification for the way Rodney King was treated. It was sickening to watch. Four officers were charged with using excessive force, and when they were acquitted it lit the fuse that caused decades of racial oppression to explode. Protests soon turned violent, and for six days rioters looted and burned Los Angeles. In the end, 63 people were killed, and over 2,000 were injured.

As news commentators compared the Los Angeles riots in 1991 with the Watts Riots of 1965, it caught my attention. Although I grew up hearing about my dad’s experience during the Watts Riots, I didn’t know anything about what caused them. It was more tedious to do research in the pre-internet days, but it did not take long to find a common theme in most cases of civil-unrest-turned-violent-rioting: years of institutionalized racism, oppression, and injustice.

We are all appalled by the video of the police officer kneeling on the neck of George Floyd as he was laying facedown, hands cuffed behind him. Hearing Mr. Floyd beg the officer to get off him, telling him he could not breathe was one of the most heart-breaking scenes anyone of us has ever witnessed. What was the officer thinking? We may never know. But we know it was wrong. Now, once again, our evenings are filled with news coverage of rioting and looting as peaceful protests have turned violent.

Angry protests against injustice have been part of American history dating back before we had a Constitution guaranteeing the right to peacefully assemble. This is a cherished right we have as American citizens, allowing for the protection of the marginalized and the oppressed as they make their voices heard. Yet the voices of those who truly matter — the “least of these” — are being hijacked by anarchists whose only goal is to incite violence, civic leaders trying to score political points, and celebrities who want to appear relevant.

Soon the violence will end. Cities will need to be cleaned. Neighborhoods will need to rebuild. And our nation will once again ask itself, “How did we let this happen? Where do we need to go from here?” Politicians will argue about this on cable news, blaming those from the other party. We will have an election in November – you know, the election that every news commentator will describe as “the most important election in our nation’s history” – and we will get back to our post-COVID-19 lives.

We have probably seen this quote from the Reverend Martin Luther King, Jr.: “A riot is the language of the unheard.” While that looks great on a t-shirt or a sign held by a white, suburban college student, here is that same quote in its context:

As the Body of Christ, how do we respond? I am not sure what HCOG can do. Perhaps we can start by praying a prayer of repentance. Ask the Holy Spirit to reveal to us any sins of apathy, prejudice, and false judgment that cause us to deafen our ears and blind our eyes to the reality of injustice and racism. Ask Him to “plow the hard ground of our hearts” so when He sows the seeds of righteousness our lives will produce a crop of God’s love, peace, mercy, and compassion.

Also, as Christ-followers we need to learn how to listen. Not question. Not condemn. Simply listen. Maybe that is the best way to show the love of Jesus during this time of uncertainty and fear. Yes, looting is wrong and should be condemned, especially when it is organized by anarchist groups that are welltrained and well-funded. When the dust settles they will not be there to help rebuild the neighborhoods they helped destroy. But let us not forget that the anger and pain that exist in communities all across our great nation are real, and they need to be addressed. When we put aside our politics and opinions we can then listen to the pain behind the anger, and perhaps be the peacemakers Jesus calls us to be.