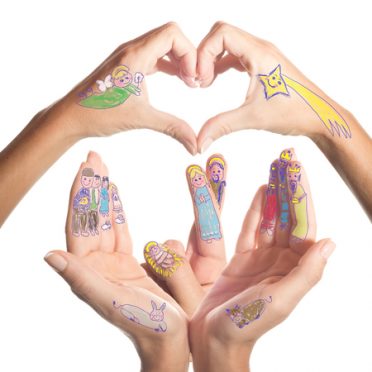 If the following story were not true, it would surely be unbelievable. It is true, however, as you yourself will agree when you have read it.

There was once a great king. His love for his people knew no limits. Although the kingdom was very large, the king knew every person by name. Everything the people of the kingdom had was a gift freely given by the loving king.

So, to show their love and appreciation to the king for all he had done for them, the people decided to have a great celebration to honor his birthday. Everyone agreed it was a marvelous idea. Preparations for the celebration were very elaborate. No expense was spared by the people. They adorned their homes with lights, decorations, and expensive ornaments. There were parties, dinners, and celebrations throughout the kingdom.

All the people brought gifts for their friends and family. Many of the gifts which the people gave each other were quite expensive, involving considerable indebtedness. In fact, the people spent more on the birthday celebration than they spent at any other time of the year.

Many who were not citizens of the kingdom, and who did not even know the king, joined in the celebration. Their celebration of the king’s birth was marked by excessive drinking. Since they did not know the king, they invented a good-natured, fat fellow in a red suit. He laughed a lot, but never said anything. But that didn’t matter because they were too busy celebrating to listen anyhow.

The day set for the birthday celebration drew near. The gifts which the people had brought for each other were piled high. The decorations were beautiful. Huge amounts of food were prepared in all the homes and banquet halls.

The king watched eagerly during all the preparation. A number of people mentioned him and spoke of what a great king he was. The king waited each day expecting at any time to hear from the people about his role in the celebration. Weeks in advance, he prepared his house to receive the many people who would be coming with their presents for him.

The great day of celebrating his birth finally arrived, and some of his people did come bringing gifts and thanking him for his goodness to them. But to his dismay, most of the citizens never came to his house at all on this day of celebration. And the gifts brought to the king by those few who came were very meager when compared with the gifts they had given themselves.

For the most part the people said they had been so busy with all the celebrations and personal plans that they had forgotten about the king. Several said they had thought of him, but really could not work it into their schedules or budgets to come to see him or bring a gift. A few were known to be quite put out when it was suggested that going to the king’s house or remembering him with a gift was important.

Those people who did come to his house and who brought their loving gifts were welcomed and blessed by the king. He told them again of his great love for each of them. And each received from the king a priceless gift. But when they had gone and he was alone again, the king fell to thinking of the vast numbers of his people who had forgotten and forsaken him. How could they have forgotten? Had he not loved them all? How could so many of his beloved people who had found the time and money for shopping and feasting and partying and decorating and all sorts of celebrations — how could they possibly be so thoughtless, so ungrateful or selfish? Did they not know that he, too, had feelings.? Was not the purpose of the birthday celebration originally planned to honor him?

When the king was alone, pondering these questions, he felt the tears well up in his eyes. And in his loneliness, he wept.

One thought brought some hope and consolation. Even though they had forgotten him, he had not forgotten them.

This Christmas, let us not forget Jesus as we celebrate his birth.

God bless you.
Your servant in Christ,
pastor mike